Full reports of AlzPED summary and presentations can be downloaded here

One of the major challenges to the successful development of therapies for Alzheimer’s disease (AD) is the poor translation of preclinical efficacy from animal models to the clinic. A number of key factors have been identified as contributors to the unsuccessful translation of therapeutic efficacy, these include: the failure of the models to fully recapitulate human AD, poor rigor, study design and data analysis, insufficient attention given to using a standard set of “best practices”, failure to match outcome measures used in preclinical animal studies and clinical studies, poor reproducibility of published data and publication bias in favor of reporting positive findings.

To address this challenge and ameliorate some of the factors contributing to the preclinical to clinical gap in the development of AD therapies the National Institute on Aging (NIA) and the National Institutes of Health (NIH) Library have created a publicly available data repository – the Alzheimer’s Preclinical Efficacy Database, or AlzPED. AlzPED is designed as a web-based portal for housing, sharing and mining of preclinical efficacy data. The data are submitted to AlzPED through a curator and gleaned from at least two sources; 1) the scientific literature; 2) directly from researchers. These data include information on AD animal models, therapeutic agents, therapeutic targets, outcome measures, related clinical trials, patents and study design. Most importantly, AlzPED is designed to help identify critical experimental design elements and methodology missing from studies that make them susceptible to misinterpretation and reduce their reproducibility and translational value. Through this capability, AlzPED is intended to guide the development and implementation of strategies and recommendations for standardized best practices for the rigorous preclinical testing of AD candidate therapeutics.

This growing knowledge platform currently houses 917 preclinical efficacy studies published between 1996 and the present (Table 1), collected from databases like PubMed and EMBASE using key word search strings specific to AD. Each study is carefully curated by 2 experts in AD research prior to publication in the database. Efforts are underway to expand the database further and balance the number of studies curated based on the year of publication. 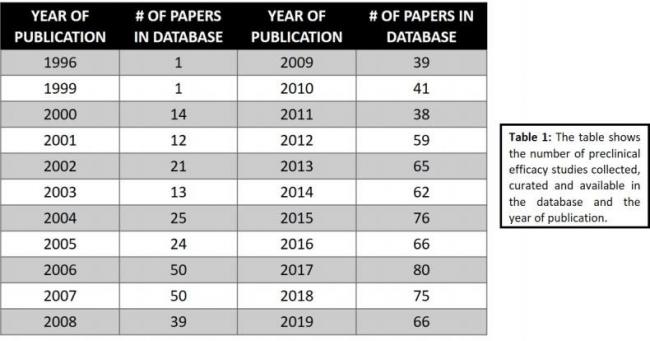 AlzPED identifies 24 experimental design elements that should be included in any preclinical efficacy study to improve its rigor, reproducibility and translational value (Figure 1). Comprehensive analysis of the 917 published preclinical efficacy studies compiled in AlzPED demonstrate considerable variation in the frequency of including and reporting these elements of experimental design. For example, experimental design elements like dose and formulation of the therapeutic agent being examined and treatment paradigms are included and reported with consistency (at 95% or greater) whereas others like power calculation, blinding, randomization, and balancing a study for sex as a biological variable are less frequently reported (less than 35%). 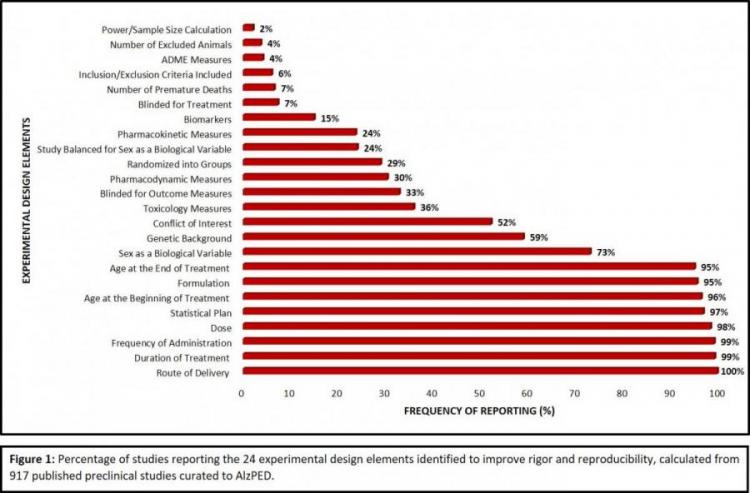 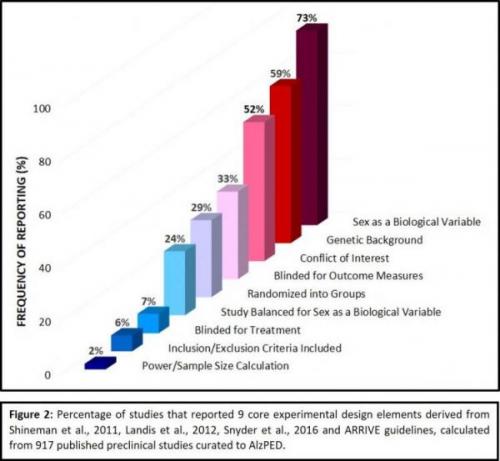 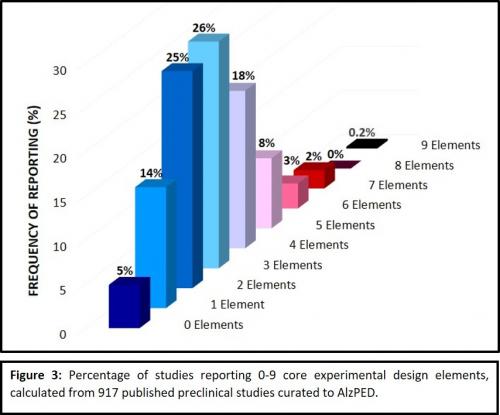 Comparisons of the reporting trends in the 9 core experimental design elements between NIH-funded studies and those funded by non-NIH agencies demonstrate considerable variations (Figure 4). Non-NIH funded studies include those funded by nonprofit organizations, pharmaceutical companies, the European Union, and the Chinese, Japanese and Korean governments. NIH-funded studies show a higher frequency in reporting several core design elements, including sex as a biological variable, study balanced for sex as a biological variable, blinding for treatment allocation and outcomes, randomization, and conflict of interest. 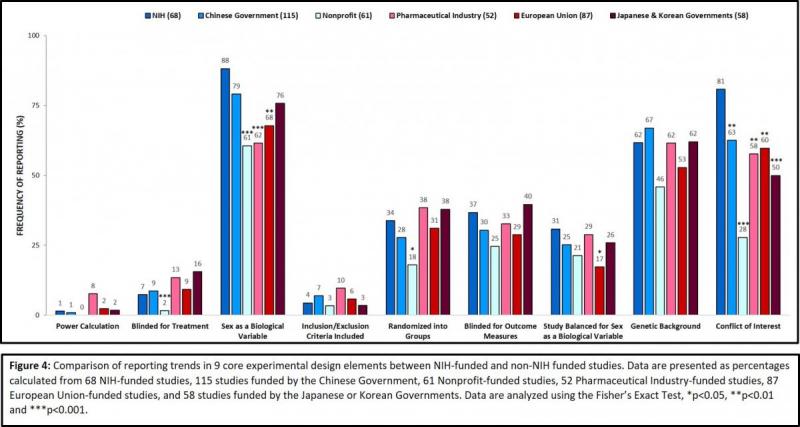 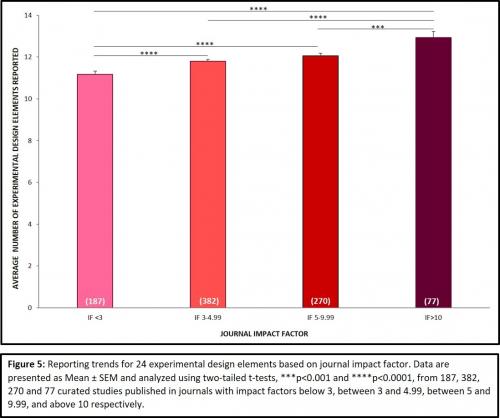 Reporting trends for the 9 core experimental design elements were similarly evaluated based on the impact factor of the journal in which the curated preclinical study was published (Figure 6). Curated studies were grouped as detailed in the previous segment. Here as well, even though t-tests show that there are statistically significant differences in reporting the 9 core elements of experimental design between these four groups, overall, the data demonstrate poor reporting practices irrespective of journal impact factor. 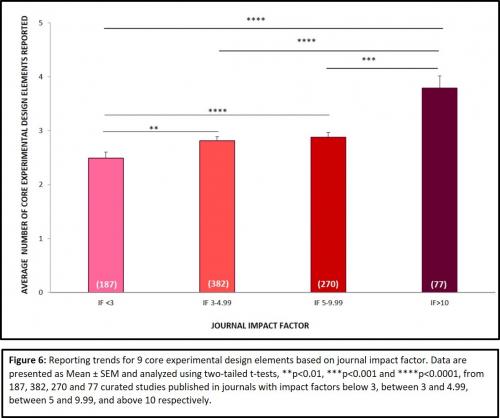 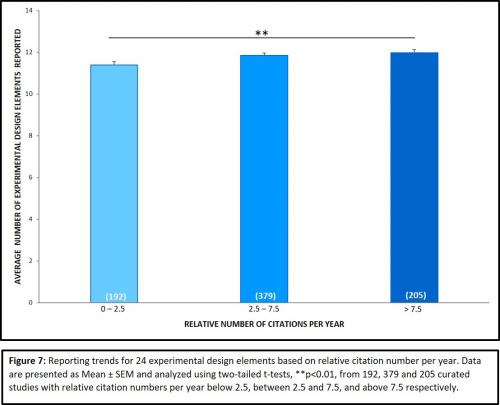 Reporting trends for the 9 core experimental design elements were similarly evaluated based the relative citation per year of each curated study published between 1996 and 2017 (Figure 8). Curated studies were grouped as detailed in the previous segment. Here as well, the data demonstrate poor reporting of the 9 core elements of experimental design practices irrespective of relative number of citations per year. 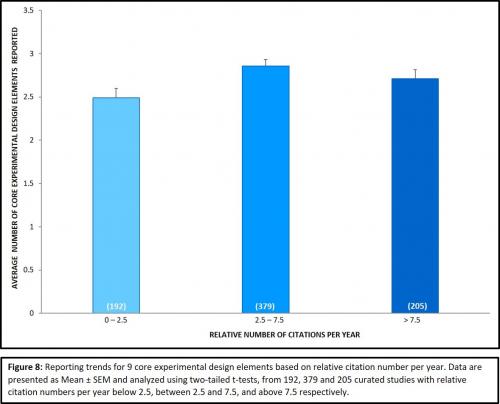 Within the 917 curated studies compiled in AlzPED, 6 different animal species have been utilized, a majority of which are mouse models of AD (Figure 9). Other animal species include rat, guinea pig, rabbit, dog and non-human primate models of AD. Preclinical efficacy data from 186 different AD animal models are currently available in AlzPED, with new models set to be included as they become available. 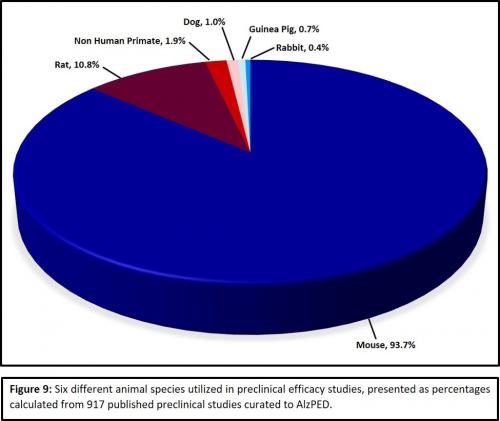 A diverse array of therapeutic agents and targets are reported in the 917 studies curated to AlzPED. The database catalogues 804 novel therapeutic agents into 14 distinct categories (Figure 10) based on agent source (natural product or synthetic), molecular structure (biologic or small molecule), chemical nature (peptide, nucleic acid, or hormone) and mechanism of action (immunotherapy – active or passive). 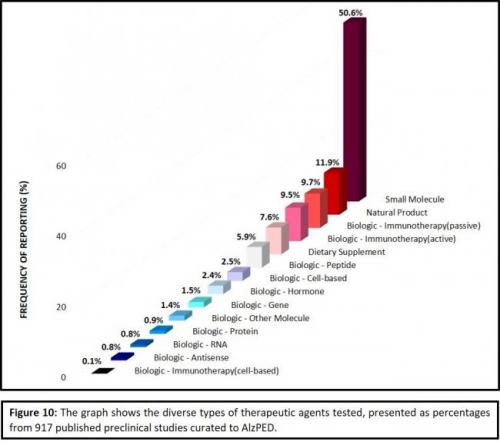 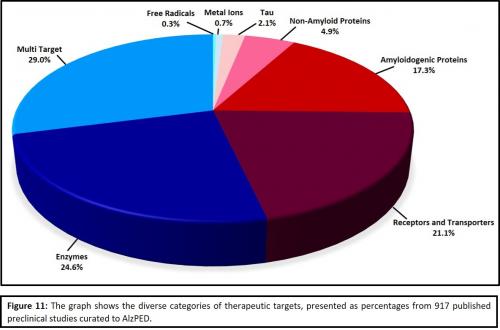 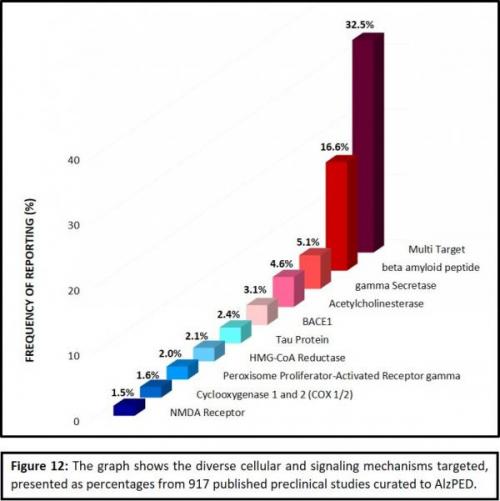 Each curated study provides an individual snapshot of the measures tested and outcomes achieved in response to the therapeutic agent tested. AlzPED defines 21 different outcome measures that are categorized as either functional or descriptive. 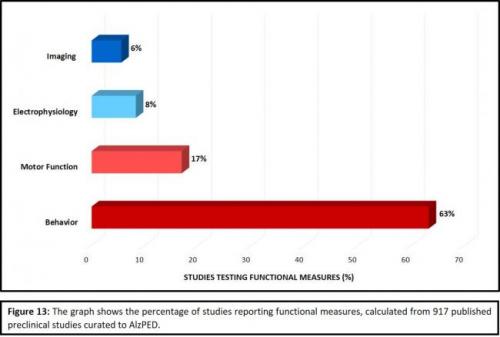 Within the descriptive measures tested, beta amyloid pathology-related biochemical, histopathological, immunochemical and biomarker outcomes are a major focus in the studies curated to AlzPED. These measures analyze several species of beta amyloid including soluble, insoluble, monomers, oligomers, fibrils and plaques. Other measures in these categories include evaluation of several species of tau (soluble, insoluble, aggregated, hyperphosphorylated and others), and astrocytic and microglial markers.

Notably, even though beta amyloid and tau species, and glial markers are a major focus, an extraordinary range of factors and molecules are investigated within these 3 descriptive measures. In total, information from 1184 biochemical, 43 histopathological and 398 immunochemical measures are currently available in AlzPED. As many as 34 different biomarkers have been analyzed, and beta amyloid markers in plasma, serum or CSF constitute a large proportion. 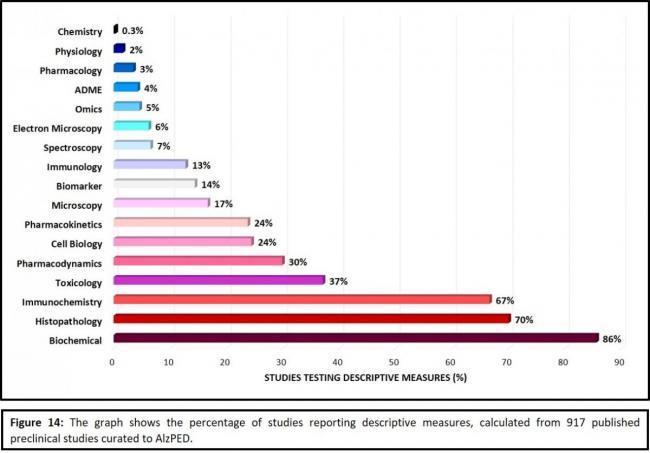 Other frequently studied descriptive measures used to characterize the therapeutic agent being tested include ADME, pharmacokinetic, pharmacodynamic and toxicology outcomes. Of the 25 ADME measures studied, the most commonly tested are biodistribution, metabolic stability and cytochrome p450 inhibition capability of therapeutic agent. Similarly, 96 different pharmacodynamic measures are examined with key focus on reducing beta amyloid species. As many as 55 pharmacokinetic measures have been analyzed, and drug concentration in brain and plasma are most frequently evaluated. A comprehensive listing of at least 93 toxicology measures such as Ames tests, enzyme profiles, organ histology and others are available in the database as well. Of these, the most frequently evaluated are body weight, general behavior and food intake.

AlzPED reports on 14 different physiological measures from which blood pressure and cerebral blood flow are most frequently evaluated and 7 pharmacological measures from the most commonly tested are binding affinity and target selectivity of the therapeutic agent. As many as 90 cell biology outcomes are measured, and cell viability and cytotoxicity are the most common measures. Of the 34 immunological measures reported, antibody titers and target specificity are most frequently evaluated. AlzPED also informs on 13 OMICS-related measures such as metabolomics and gene expression profiles. Finally, AlzPED also reports on 34 electron microscopy outcomes, 55 microscopy outcomes and 14 spectroscopy outcomes.

Analysis of curated studies in AlzPED demonstrates serious deficiencies in reporting critical elements of methodology such as power/sample size calculation, blinding for treatment/outcomes, randomization, sex of animal used and balancing for sex, animal genetic background and others. These deficiencies in reporting critical elements of methodology is also is demonstrated in high impact factor journals as well as highly cited published preclinical research. These deficiencies in study design and methodology diminish the scientific rigor, reproducibility and translational value of the preclinical studies, making it evident that a standardized set of best practices is required for successful translation of therapeutic efficacy in AD research.